130 Years of Fostering Well-Being in Our Community

While services were first held at Unity Temple on The Plaza in 1948, our roots go back to 1889 to Charles and Myrtle Fillmore.

At the age of 40, Myrtle Fillmore became very ill. She was told she had tuberculosis and had less than 6 months to live.

When traditional medicine and doctors ceased to give relief, she began to research alternative means of healing. She attended lectures by practitioners who were on the cutting edge of spiritual healing. Myrtle had an epiphany. She awakened to the truth that she was an expression of divine spirit and it was through that very spirit she could be healed.

She discovered Affirmative Prayer. Instead of pleading with God to give her something or make something happen, Myrtle affirmed that what she asked for was already in the process of happening. She prayed and meditated daily for over two years. She communicated positive, healing thoughts to the cells of her body. Myrtle’s faith never waivered and she went on to live another 46 years.

Inspired by renewed health, the Fillmores became interested in giving people practical tools in Christianity to improve their lives. Charles studied world religions and philosophies. He also studied the link between religion and science. In 1889 Charles and Myrtle start writing about their beliefs, and shortly thereafter Unity is born.

In 1891 Charles chooses 'Unity' as the name for the movement they are founding.

Myrtle starts Wee Wisdom in 1893, a monthly magazine for children, and remains editor for many years. When it is discontinued in 1991, Wee Wisdom was the oldest continuously published children's magazine in the country.

Lessons in Truth by H. Emilie Cady began as a series in Unity Magazine in 1894. It was published as a book in 1903. Over the years it is translated into 11 languages, is published in braille, and has sold more than 1.6 million copies.

The Unity Society of Practical Christianity is incorporated as the first Unity church in 1903 and the Fillmores start Unity School of Christianity in 1914 to handle their publishing and educational work.

In 1919 the first 58 acres of the present Unity Village site are bought in eastern Jackson County, Missouri. Other buildings are planned, but construction stops during the Great Depression and World War II.

Unity becomes a pioneer in radio broadcasting. Charles gives his first Unity lesson over radio on station WOQ in 1922. This has been documented to be the first radio presentation by a clergyman in Kansas City, Missouri.

The first issue of Unity Daily Word (renamed Daily Word in 1939) is published in July of 1924.

The 165-foot-tall Tower and the Silent Unity building (later known as the Education building) are constructed at Unity Village in 1929. In 1989 these buildings are put on the National Register of Historic Places.

In 1931, at the age of 86 years old, Myrtle Fillmore makes her transition. She is called the “Mother of Unity.” She saved many of the letters she received, as well as her responses, which are about the healing power of prayer. Her beliefs are the foundation of Unity today.

Charles retires from the pulpit of Unity Society of Practical Christianity in 1933. He continues as president of Unity School of Christianity. Charles marries his second wife, Cora Dedrick. During the next 10 years he spends a lot of time traveling and speaking to groups of people.

In 1949 Unity School moves from downtown Kansas City to Unity Farm, renamed Unity Village in 1953. There are fruit orchards, vineyards, and a dairy. People from all over Kansas City come to Unity Farm to buy fresh vegetables and milk.

Unity Village is incorporated as a municipality in Missouri. Unity's first television program, The Daily Word, is started by Rosemary Fillmore Rhea, the granddaughter of Charles and Myrtle Fillmore in 1953.

In 1969 The Word makes its first appearance on television. The programs run until 1992.

Unity celebrates its centennial in 1989. The Unity School of Christianity Historical District is placed on the National Register of Historic Places.

Silent Unity, one of the oldest 24-hour prayer ministries in the United States, answers two million prayer requests by 1997. 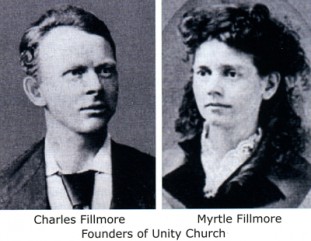